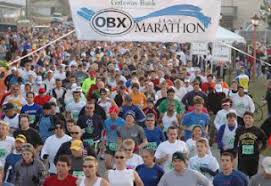 OK, so it’s no secret…I am not a runner.  I do like my long walks and that’s all that they are.  There are many people who run.  Daily.  If not daily, then several times a week or weekly.  So, it should not be a surprise that many of these folks partake in organized marathons.  These marathons and half marathons are put on by hundreds of organizations and for hundreds of causes.  One such organization, Outer Banks Sporting Events, hosts several events every year.  Marathons, half marathons, cycling events and more.  Their bread and butter event is the OBX Marathon held every November.

There are literally dozens of runs every year out in the Outer Banks.  There are runs on various holidays, such as Thanksgiving and New Years.   When people talk about the main run events at the OBX, the OBXSE events are the ones that come to mind.  These events offer great camaraderie, competition, as well as health and fitness.  If that’s not enough, you’ll get t shirts, medals and an after party afterwards.  These parties include food and beer!

So what are you waiting for?  If running is your game, have a look at these events and start planning your stay with us. Don’t forget, there are other things you can do if running is not on your list of things to do. https://mvillaobx.com/our-obx-top-10/ 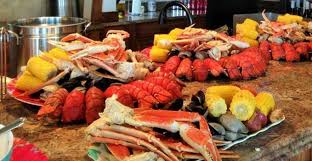 Our OBX Taste of The Beach

Every March, there is an OBX Taste of the Beach event that takes place across the Outer Banks, celebrating all things food.  Participating restaurants showcase the best of their menu or special menu items across 4 days.  This is often coupled with special events, like a cook off or cooking showdown, wine tasting, tapas crawls, cooking classes and more.  The final day of the 4 day spectacle always has a Grand Tasting event.   Multiple restaurants gather in one location and customers are able to sample infinitely from their offerings.  Each event offers tickets for a fee.  If interested, you should review the Taste of the Beach website and make your plans.  Careful and act fast!  Some of these events sell out.  https://www.obxtasteofthebeach.com/

Our Taste of The Beach

While the TOTB event is organized by the Outer Banks Restaurant Association, Crystal and I often conduct our own TOTB event.  With each visit out to the coast, we have our own list of restaurants that we consider visiting.  There are so many, that we can never get to them all.  So we compromise based on what we had our prior visit and what we feel like eating currently.  It becomes quite the debate at times.  After all, food at the OBX made it into our top 10. https://mvillaobx.com/our-obx-top-10/ Please see our list below.  Note that they are in no particular order.

There are so many other places that are on our list to try. It’s just so difficult to move on from what we know and love already. We’ll slowly try to branch out and report back. Enjoy and bon appetite!

I’m not an avid fisherman by any means. It’s hard not to mention the OBX and not think about fish.  After all, if you like seafood, it all starts with catching the seafood.  Right? So how about we learn about some OBX fishing!

Best I have found, fishing on the Outer Banks began back with the Native Americans who were in the area. When Arthur Barlowe reached the Outer Banks back in the 16th century, the Native Americans showed him what the sea had to offer.  When they showed him how to bow fish, it was all over and he was “hooked”. Prior to the Civil War, commercial fishing was limited.  The lack of refrigeration made it difficult to travel with the goods.  The fish would have to be salted and dried.  After the Civil War, the US transportation system flourished and goods were able to reach their markets with better speed.  Perishable products were transported and sold as “fresh”.  Fishing as an industry and way of life became possible and lucrative. Aside from fishing, boat building on the Outer Banks took off as well.  Vessels were needed to meet the demand of procuring seafood.  Boat building also allowed for smugglers to run rum during prohibition times. Wanchese became the center of the commercial fishing industry on the Outer Banks.  Located at the South end of Roanoke Island, you can still go and get the day’s fresh catch and see the shipbuilding warehouses there.

There are many areas on the Outer Banks which allow for you to grab a charter boat and go out into open water for a great day’s worth of fishing.  For those of us who don’t mind shore fishing, there are a couple of ways to go about on your own.  If you venture out to one of the local piers, you pay a nominal admission fee and can fish all day if you’d like.  You can bring your own fishing gear or rent from them.  They’ll sell you the bait you need for the type of fish you’d like to catch.  They’ll give you advice and more importantly, you’ll not need a fishing license as you’re an attendee of the pier and covered by them.  You can also venture out on your own and fish from the beach.  Of course, you’ll need to stop by the local tackle shop to grab a license.  While you’re there, speak with the store personnel.  They’re fishermen as well.  They’ll tell you what you need, where to go, and what bait to buy.  Prices are very reasonable.  Plus, you’re supporting locals!

We can go into a whole other segment speaking about the different fish and seafood that is available out at our favorite coastal destination.  For a brief summary, also look at https://mvillaobx.com/fishing-outer-banks/