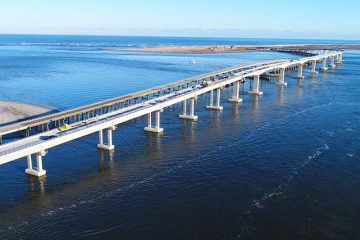 The Bonner err Basnight Bridge is finally complete and open for business!  There was a huge wait to see what the newly constructed bridge over the Oregon Inlet would be called.  That decision has been made and it shall be called the Marc Basnight Bridge.

Who is Marc Basnight anyway?  Basnight served as a NC State Senator from 1984 to 2011, when he resigned due to health issues.  Basnight is an OBX native who grew up, and subsequently graduated from Manteo High School.  He became a local, successful business owner before being elected to state senate.  His legacy lives on in the restaurant he owns in Nags Head.  The Lone Cedar Cafe actually burned to the ground in 2007 and was fully rebuilt.

The old, Herbert C. Bonner Bridge is set to be demolished by the end of 2019.  That 2.7mi bridge was named after former US Congressman, Herbert Bonner, who served from 1940 until his death of cancer in 1965.  The bridge was built in 1963.  For years, there was a natural connection between the Northern OBX beaches and the Southern OBX villages of the now “Hatteras island”.  Hatteras island was formed when a hurricane ripped an inlet through the island in 1846.  It was recognized that these southern villages now needed a lifeline to the North.  Ferries performed this task, but operations were expensive.  Bonner made that bridge happen, to the tune of $4 million.  As you can imagine, tourism flourished as people could freely access the southern villages.  In recent years, it was discovered that many of the pilings had deteriorated to the point of not really supporting anything below the surface of the water.

The new, Basnight Bridge is open as of February 25th.  It spans 2.8mi and cost $252 million.  Construction began in March of 2016.  At its highest point, it scales 90ft over the Oregon Inlet.  Showcasing a bit of technology, the bridge is the first in the state to be made of reinforced stainless steel.  This material is said to make the bridge a 100 year bridge due to it’s salt corrosion resistance.

So how many folks look forward to utilizing this new bridge when they visit the Outer Banks?  I for one, look forward to checking it out.  We missed the opportunity a few weeks ago to traverse the bridge on foot.  The first and last time it’s said to be open for pedestrian traffic…right down the middle of the roadway.

**UPDATE** There was an official ribbon cutting on April 2nd, 2019 for the new bridge. Read all about it here: https://islandfreepress.org/outer-banks-news/gov-cooper-and-local-state-officials-attend-ribbon-cutting-ceremony-for-new-bridge/