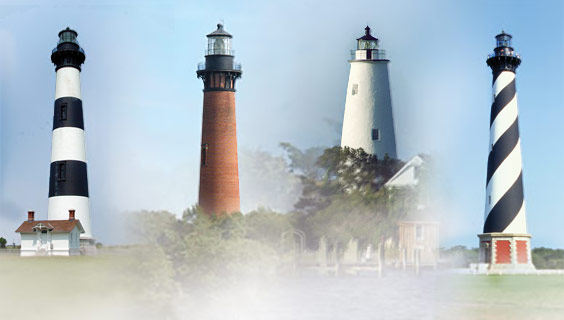 What Are the Five OBX Lighthouses?

Have a look at our OBX top 10, which includes the OBX lighthouses.

This lighthouse is unmistakable in appearance.  It’s made up entirely of brick that was left unpainted.Built in 1875, it’s considered a First Order lighthouse.  This means it has the largest Fresnel lens available.  There are 7 different sizes of these lenses.  It’s open 9am-5pm March 16th-December 1st, 2019.  Between Memorial Day and Labor Day, it’s open Wednesday’s and Thursday’s until 8pm.  This is all weather permitting of course and the cost is $10 for anyone over the age of 7.

This lighthouse is also very unmistakable in how it looks.  However, unlike the other lighthouses on the OBX, this one is not the original.  It’s actually been rebuilt 4 times.  The location in Manteo is also not the original location.  That location was at the entrance to the Croatan Sound in Wanchese.  The first lighthouse was built in 1831.  It went neglected and rebuilt in 1858.  It was devastated due to surrounding environmental conditions in 1872.  The next (third) lighthouse was built in 1877.  It performed its duties until the 1950s when it was deemed not necessary and decommissioned in 1955.  It was sold privately and ultimately lost in the sound when the attempt to move it inland was made.  In 1999, the 4th recreation began construction in Manteo and became operational in 2004.  During the warm weather months, the lighthouse is open from Tuesday through Saturday 9am-5pm. Free parking nearby and no charge to visit.

The Bodie Island lighthouse is yet another example of a structure that has been rebuilt at least 3 times.  It also doesn’t reside in its original location.  In 1837, the need for comprehensive guidance was asked for by Lt Napoleon Coste.  He stated that “…more vessels are lost here than any other parts of our coast.”  Construction began in 1847 South of Oregon Inlet, on Pea Island.  It was completed in 1857 and abandoned in 1859 due to construction hazzards.  It was leaning.  The second lighthouse was built quickly in 1859 but didn’t last long.  Retreating Confederate troops blew it up in 1861 for fear that Union troops would utilize it.  In 1871, construction began on the 3rd lighthouse on the current 15 acre site, North of the Inlet. It went into service in 1872.  There was a keeper’s quarters constructed onsite as well.  However, with electricity being supplied to the lighthouse, the need for a keeper was no longer needed in 1932. The Bodie Island Lighthouse is open 9am-4:30pm from the third Friday in April through Columbus Day (in early October). Climbing tickets are $10 for adults and $5 for senior citizens and children under 11.

Perhaps the most interesting and recognizable of the lighthouses is the Cape Hatteras lighthouse.  Not only has it been extended in height, but it no longer resides in its original location.  Construction began in 1799 to a height of 90 feet and first lit in 1803 using whale oil.  It was made of sandstone and blended into its environment.  It was deemed too short and not colorful enough to do its job effectively.  In 1853, the height was taken to 150 feet and the new addition was painted red.  A first order lens was added.  Due to the need for extensive repairs, a new lighthouse was constructed in the late 1860s.  The new lighthouse was lit in 1870.  The original was demolished in 1871.  The black and white paint job was added in 1873.  Operations were actually suspended from 1935-1950 due to the beach erosion near the lighthouse.  A metal skeletal tower took over duties.  The beach was restored by 1950 and the beacon was moved back to the lighthouse.  In 1999, the decision was made to move the lighthouse 2,900 feet inland due to erosion once again. The lighthouse is open 9am-4:30pm  from the third Friday in April through Columbus Day (in early October). Climbing tickets are $8 for adults and $4 for senior citizens and children under 11.

The area in and around Ocracoke Inlet became very busy by the 1700s. The need for a lighthouse there was well observed and the decision was made to construct one in 1794.  Completed in 1798, it was deemed obsolete by 1818 due to migration of the main channel.  The lighthouse and keeper’s quarters were destroyed by lightning in that year.  In 1822 land was secured at the South end of Ocracoke Island and a new lighthouse was constructed in 1823.  This 75 foot structure still stands today. It’s solid whitewashed exterior is recognizable and unique.  While you cannot climb the lighthouse, you can visit the grounds daily.

So as you can see, you can make a good part of your vacation just visiting lighthouses.

We look forward to having you as guests!
Aris