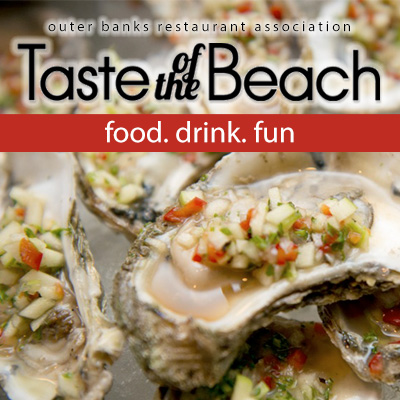 OBX Taste of the Beach Recap

The famous weekend known as the OBX Taste of the Beach has come and gone.  Crystal and I attended one of the weekend’s event a couple of years ago with another friend of ours.  We attended the cornerstone event named the Chef’s Grand Tasting and Bubbly Bash, where 15-20 restaurants and their chefs, showcase their skills.  All types of entree samplings and desserts.  Again, what was two years ago at the now defunct Port O Call restaurant.  The Bubbly Bash portion is due to an equal number of bartenders from various establishments showcasing their cocktails and drink specialties.

This year, two friends and myself attended two events.  We decided to attend the BBQ and Wings Showdown on Saturday afternoon and the Chef’s Grand Tasting event.  Both were at the Soundside Event Site venue in Nags Head.

Not really knowing what to expect, we bought our tickets for this event and figured we’d have a good time regardless.  How can you go wrong chowing down on BBQ, ribs and wings?  That’s exactly what this was.  We walked into the tent at the event site and were handed a docket of participating restaurants, which also became your scoring sheet to rate the food.  You are encouraged to vote for best ribs, best wings and best BBQ as well as best in show.  You are also handed a punch card which entitles you to three drinks.  More drink cards (3 drinks) are available for purchase for $10.  There were a handful of stations from local breweries and NC wineries there for you to sample their products.  So you make your way around the tent and grab as much or as little as you’d like to sample from each of the restaurants.  You get to speak to the chefs and find out what they’re thinking and how they come up with their selections.  So many wings, sauces, ribs, sauces and all sorts of pulled pork BBQ.  Some chefs decide to go a step further with their own interpretations, like chef Jeremy Worthy from the Sandtrap Tavern, who offered up his 4oz pork shanks in his own mustard sauce.  When it’s all said and done, they announce the winners for each category.  However, there are People’s Choice awards granted as well as Judge’s Choice awards.  My final comment on this event is that it is the most I have eaten in quite a long time.

Having done this event a couple of years ago, I sort of knew what to expect when I walked into the tent for this one.  You are handed a docket/menu/voting card in one hand and a mini tray and champagne flute in the other.  You are then told to make your way from restaurant to restaurant to sample their entrees and confections.  This setup takes up about half of this huge tent.  On the other side of the tent, you’ll find local breweries, wineries and bartenders offering their products.  The kicker?  Free of charge for the drinks.  No punch card, no gimmicks.  You are encouraged to leave tips for the bartenders which also serves as the way to count votes for the best drinks!  The proceeds are counted up and serve as vote tallies.  The proceeds go to the Beach Food Pantry.  We walked around and sampled a ton.  Rare tuna on herb tabbouleh, seafood cocktail, smoked mac n cheese with bacon wrapped shrimp, a couple of different seafood and pork egg rolls.  It doesn’t end there.  Scallops over Gouda with a bacon chutney (our favorite) from the Chef at Striper’s.  The same chef offered up a sous vide prepared rockfish over sweet potato puree.  The offerings were tremendous.  Key Lime pies, little berry tarts, exotic bread pudding, and more.  Again, when it’s all said and done, the votes are tallied and a People’s and Judge’s Grand Champion is awarded.

Both events were run tremendously well.  My one criticism?  In my opinion, both events seem to long time Outer Banks Restaurant Association members.  Restaurants and Chefs that have been on the beach for a long time.  There were many awards given that completely surprised me.  Surprise as in I…I would not have placed these folks in the top 5, but somehow they won the main awards.  How and why?  Not for me to determine. I will say that I tend to judge food more on the substance and not the sauces that they are covered in.  Regarding the wings and ribs, I believe many may have judged the sauces.  Would I do it again?  The Grand Tasting?  Absolutely!  It’s such a carefree and worthwhile event if you are a food person.  The BBQ and Wings showdown?  Not so much.  At the end of the day, there are only but so many wings and so many ribs that you can eat and have them taste different. My advice to you?  Plan on going next year and book your time early.  As I did this year, I will wait until about a week before the event before I buy tickets to any events and block off the condo for our use.  It’s fair game for someone else before then! 🙂

We look forward to having you as guests!